This page explains the standards to respect for the titles to give to pages.

How to change a title[edit | edit source] 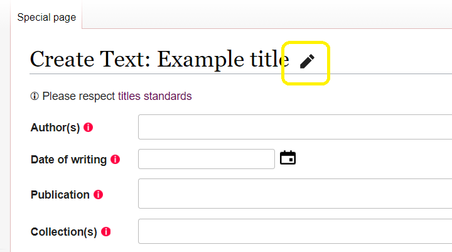 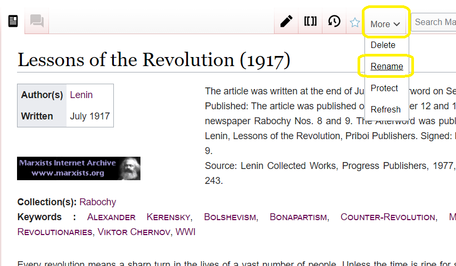 First, there is a technical thing to highlight : two pages can't bear the same title.

So, if two texts have the same title, their corresponding pages on this archive have to be given different titles. Therefore, there has to be basic rules to choose these titles.

The standard on this archive is to add a date information between brackets after the title. Generally this can be only the year of writing. But if there are several texts bearing the same title in the same year, it won't be enough to add the year, then it is necessary to add the month and year of writing. Exceptionally, there can be several texts with a same title written in the same month. In this case, it is necessary to add the day.

If you try to add a text and give it a title already used on this archive, you will get a warning. In this case, change imperatively the title, otherwise the existing article would be overwritten.

If you add a text bearing a very simple / common title, consider adding this kind of date precision, even if there is currently no text with the same title on the archive. It could happen in the future, and it will save time.

Letters have to be given a standard title, for the same technical reason explained above, but also because it is far easier to browse the archive if the huge number of letters imported respect a standard title format. Moreover it makes it easier to see if a letter has already been imported, and not to import it again under another title.

So, the format of the letters on this archive is (examples) :